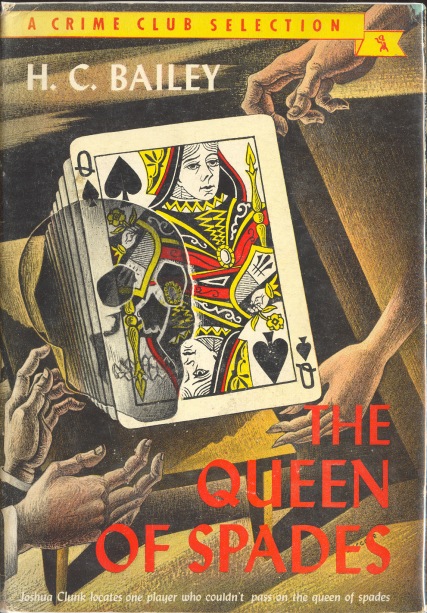 The aim of the game, as the title suggests, is “to catch one of the men with the women who would damn him” on a charge of involvement in the large-scale robberies, black market activity and Fifth Column espionage committed in the coastal town of Sturton (of which a map would be nice). Although there is less of him than the reader wants, Josh Clunk, that villainous lawyer (acting, for once, with the full co-operation of Supt. Bell and the local police), it is who discovers the connection between the attempt made on the life of a dock official, the false accusation of housebreaking in London, and the dead body in the quarry. Although the twists and turns of the plot are as complex as Mitchell at her least inhibited, the reader’s attention is kept throughout, and the whole situation is made wonderfully clear with the unmasking of the surprising murderer in an extremely sinister and tense scene displaying Bailey’s mastery of lunatic psychology. The double twist at the end is, for once, organic, and its resolution allows Clunk to go one step further than Vitellius Wolfe in his lust for food: he blackmails the murderer (who escapes justice) into keeping his family in chocolate cake and pastries for the rest of their days! Mr. Clunk may be a devotee of Marie Antoinette, but we are devotees of Mr. Clunk.

You may be troubled by a slight nausea caused by Mr. Clunk’s personality, but you’ll have to admit that this is a perfectly fair puzzle and intricate enough to occupy your mind thoroughly.

Not the best Bailey.

All the makings of a fine plot are here—a hint of black market doings, possible espionage and a great deal of local skulduggery.  But somehow it doesn’t quite come off.

The story is told by the hop-skip-and-jump method, as though it were not complicated enough without this device.

This has a complicated plot, rather jumpy action suitable to Mr. Bailey’s mannered prose and a believe-it-or-not conclusion that needn’t worry the confirmed Bailey follower.  As we all know, Bailey stories mustn’t be skipped.

Lawyer Clunk helps detectives Bell, Hall, and others solve batch of inexplicable slayings in London and coastal town.  Irritating complexities of serpentine plot brightened by Mr. Clunk’s sly sleuthing and hypocritical quips. Action a-plenty, but all mixed up.  Not the best Bailey.

Vigour increases chapter by chapter in Mr. Bailey’s new book.  No matter how vague the unknown criminals and their motives may be the tension matches the atmosphere of danger to shipping.  Mr. Clunk has never been so oily or so active.  He flits from one triviality to another until he begins to indicate the pattern of a spider’s web.  There is excitement most of the way through the story.  But Mr. Bailey gets into a fix because he commits one crime too many and this keeps him explaining after everything else has been most satisfactorily cleared up.

Preferring the sanctimonious Clunk to Mr. Fortune, who, for me at any rate, loses much of his egregious alimentary cosiness with rationing, I was quite happy with Mr. H.C. Bailey’s Slippery Ann.  This is a highly complicated mystery in a harbour town, with several murders in a tangle of black market, fifth-column, and private vengeance.  The end is wild, but you can sit down and read it quite quietly.