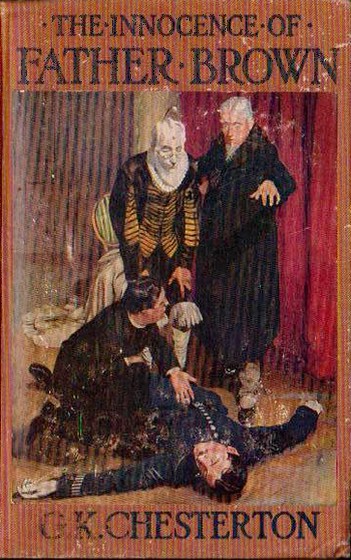 The first Father Brown story is a comic tour de force, with Chesterton’s atmosphere magical — the ability to see the wondrous and the incongruous even in everyday life: e.g., a café, a fruiterer’s stall, all objects that Valentin comes across while following the trail of bizarre events that leads him to Flambeau — and to Father Brown.

“Keep out of the monstrous garden where grows the tree with double fruit. Avoid the evil garden where died the man with two heads.”

The first impossible crime — how did the murderer and the murder victim get in and out of the impenetrable garden? Eerie atmosphere, beheadings, and French atmosphere recall early Carr. The plot, it must be added, is brilliant.

The murderer kills for religious reasons, is proud of his crime, and does not repent.

A masterpiece, in which the little priest finds a thoroughly brilliant and original explanation to the question: “Why on earth should a man run in order to walk? Or, again, why should he walk in order to run?” Hotel atmosphere and political / social satire both outstanding.

Like A Christmas Carol (which inspired this tale) and “The Blue Carbuncle“, this is a delightful and heart-warming comedy, one which really shows Chesterton’s joy of living. An ingenious and hilarious plot which demonstrates how farce and the detective story should combine.

This is the story in which Flambeau repents.

Again, the impossible crime; this time, solved by one of the most staggeringly surprising, brilliant and audacious solutions in the genre, as Father Brown and the (reformed) Flambeau investigate the problem of how a man entered a building, unseen, leaving a trail of footprints, committed a murder, and left the flat, the corpse in his arms.

The Honour of Israel Gow

Not the best Father Brown, owing to the rather silly solution. However, the atmosphere of the romantic Scottish castle inhabited by a miser and his half-witted retainer (Lament for a Maker, anyone?) is wonderful; the multiple solutions from the bizarre collection of physical clues ingenious; and the story worth reading for the sake of the remark about the dentist alone.

Having tackled impossible disappearances, Father Brown now investigates a locked room killing in a lush and bizarre semi-Oriental household, whose members include Chesterton’s first mystic. The method used to kill a man, apparently by suicide (“I die by my own hand, yet I die murdered”), is very clever.

The Sins of Prince Saradine

A dream-like tale, in which Flambeau and Father Brown arrive on an island in which nothing is what it seems to be. The plot is brilliant, at once simple and staggeringly complex; and the story includes Chesterton’s first crooked duel.

The Hammer of God

One of the best-known Father Brown tales. The solution Father Brown finds to the enigma of the man found with his head shattered from a single blow from a tiny hammer is brilliant. Religion neatly worked in, and the church first-class.

The Eye of Apollo

A literal and brilliant application of the old maxim ‘Pride comes before a fall’ is behind this story (and behind Ronald Knox’s “Solved by Inspection”, modelled on this story), set in a block of flats, two suspect, including a sinister mystic, who could not have committed the murder.

Chesterton’s masterpiece —” bleak and brilliant.” The gloomy procession through the Arctic woods, Father Brown’s enigmatic remarks (“Where is the best place to hide a tree?”), the horrors of what really went on in Brazil, and the exposé of heroism make it outstanding even among the Father Brown tales, which are so brilliant that the wood cannot be seen for the trees. This is the ancestor of Anthony Berkeley’s The Silk Stocking Murders and Agatha Christie’s The ABC Murders.

The Three Tools of Death

A neat parody of the detective story, providing the basis for Carr’s 1937 classic The Four False Weapons, and with a typically ingenious reverse solution.